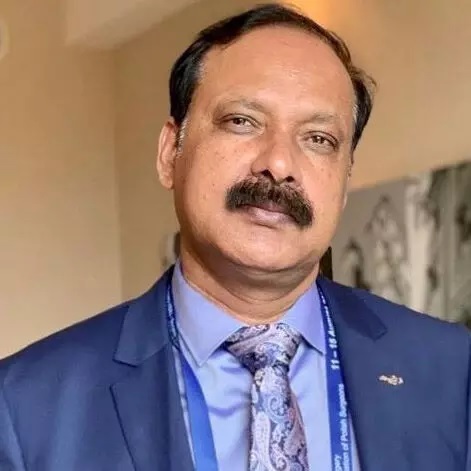 Prof. Ashok Puranik assumed the appointment of Executive Director, AIIMS Guwahati on July 10, 2022. Immediately before joining the Institute, Prof. Puranik was heading the Department of General Surgery, as well as super-specialty Departments of Trauma & Emergency, Gastro-intestinal Surgery, and Plastic Surgery at AIIMS Jodhpur.

Prof. Puranik is an alumnus of the renowned Pt. Jawahar Lal Nehru Memorial Medical College, Raipur. He was commissioned in the Indian Army as a Medical Officer in 1985, and he initially worked in the North- Eastern states which included a prolonged stint in the high-altitudes, caring the soldiers and the field area. Later, in 1992, he completed his post-graduation in Surgery from the prestigious Armed Forces Medical College, Pune.

During his illustrious service of more than 3 decades in the Indian Army, Prof. Puranik was involved in field as well as peace tenures across the country and abroad which included tenures in Nagaland, Kargil, CI Ops, and Sri Lanka. He also served as the Head of Surgery at the Command Hospital – Southern Command and Armed Forces Medical College, Pune for a duration of 5 years. Notably, Prof. Puranik had also served as an army surgeon in the longest traveling ambulance train ‘Operation Dhanwantari’ – an effort that made into The Guinness Book of World Records.

Some notable events in the professional career of Prof. Puranik with the Indian Army include:

Prof. Puranik is an internationally recognised trauma surgeon and surgical intensivist, having completed his Fellowship in Trauma from the renowned Alfred Hospital, Melbourne, Australia. He was also involved in teaching and mentoring in the fields of advanced laparoscopy, bariatric surgery, damage control surgery in trauma, and emergency management in trauma care.

Prof. Puranik has several accolades to his credit including the GOC in C Award for ‘Outstanding Clinical/ Scientific Achievement for Trauma Surgery’ and various medals for High Altitude and General Services. He is a member of the International Hi-Tech Surgeons and the Armed Forces Surgeons of India. Prof. Puranik is a doyen in the field of Trauma Care, and he is constantly involved and invested in the development of a regionalised trauma system in India. Outside patient care and academia, Prof. Puranik is also an acclaimed author, a popular keynote speaker, a futurist, and a strategic business & technology advisor to governments and companies.

At AIIMS Guwahati, Prof. Puranik envisages to develop the Institute into a state-of-the-art facility that caters to the three-pronged approach adopted by the AIIMS institutions, namely, Quality Medical Education, Evidence based Patient Care, and Cutting-edge Research.